What is Catalytic Converter?

Widest use of a converter is in automobiles. It provides a second burning stage to hydrocarbons that are not burnt completely and a reduction process to polluting gases. This burning and reduction is made by the help of several catalyzers (platinum, palladium or rhodium). Because the second burning stage is completed outside the engine, there is no utilizable energy gained from this process.

In means of balanced working, these three reactions are not in balance both in rich mixture or lean mixture. While first two reactions occur more often than the third in lean mixture, the third reaction occurs more in rich mixture. So the fuel that is not completely burned because of the rich mixture is burned in the converter. Its channels are coated with Platinum, Palladium, Rhodium and Cerium. The Palladium and Platinum inside the converter provides the oxidation of HC and CO and the Rhodium provides the reduction of NOx. Cerium stores and keeps the needed level of oxygen varying during the rich or lean operating of the engine. 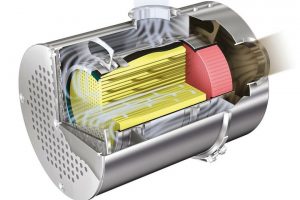 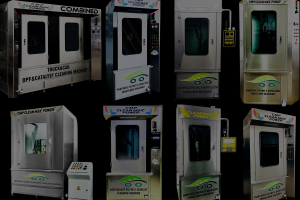 View all posts by Semkon Machinery →